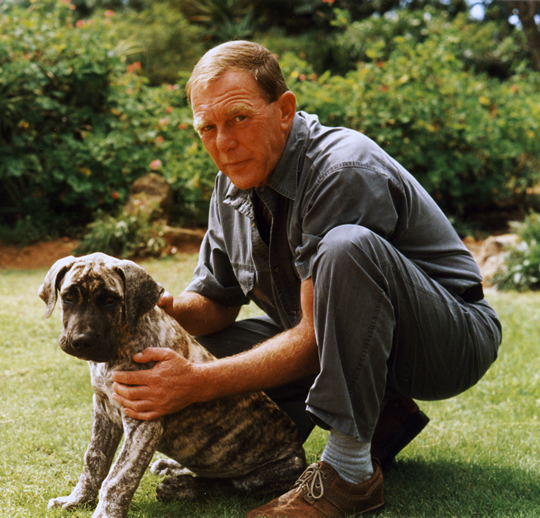 John Rice, founder of The Courteney Boot Company, was a master shoemaker and designer who started his career with Clarks shoes in September 1953 aged 15 as a trainee in the Pattern Development Department.  There was no better place for him to develop his talent, and John won his first international award at 17 for designing a stitchdown shoe with a crepe sole.  This accolade fired John’s ambition to have his own workshop one day, making stitchdowns and traditional African ‘vellies’.

Shoemaking was a family passion; relatives from both sides of his family worked at the Clarks Street factory and he would see most of them daily.  However he spent as much time as possible in his Uncle Bert Simpson’s factory where Bert managed the production of the Desert Boot.

John was promoted to Clarks management staff at the very young age of 23, and was pattern making, and tooling for production, several of the satellite factories in England’s West Country.  With a good position at Clarks he could indulge his other passion – motorcycle racing, and at weekends he would travel all over England to compete.

Demobbed after two year’s national service with the Somerset Light Infantry he returned to Clarks which by now employed nearly seven thousand people worldwide.   John was able to meet other shoemakers from Clarks factories throughout the Commonwealth, but it was South Africa, the home of the veldtschoen, that attracted him most.  To this adventure-spirited young man the pull of Africa was strong, and so in January 1964 he made the journey to the continent that was to become his home, and for several years he worked very successfully as a shoe designer in South Africa.

Motor cycle racing took him on his first visit to Rhodesia in 1965, coincidentally on the weekend of Ian Smith’s historic unilateral declaration of independence.  Mr. Smith himself presented the trophies at his first public appearance as the rebel Prime Minister.  John fell in love with the country and its people, and vowed to return to pursue his dream in this wilder, more African place. Here, he felt, was a country with opportunity enough for him and his future brand of adventure footwear.

1972 saw John and his family cross the Limpopo River into a country that seemed to have remained in the 1960s.  But the bush war was just starting to escalate and the dream of his own factory had to wait.  For more than a decade, in between call-ups, John successfully ran his mentor’s footwear factory.  Then at last in 1992 came the day when John and Gale signed the founding partnership statements: The Courteney Boot Company opened for business in Bulawayo, Zimbabwe.

John enjoyed a marvellous twenty years bringing his unique skill and vision to creating a rather special form of footwear.  His lifelong dream came true:  the small workshop became a success, and the Courteney brand name established an intimate following of friends and aficionados worldwide.

We are proud to continue John Rice’s legacy.

You can find out more about which cookies we are using or switch them off in settings.

This website uses cookies so that we can provide you with the best user experience possible. Cookie information is stored in your browser and performs functions such as recognising you when you return to our website and helping our team to understand which sections of the website you find most interesting and useful.

Strictly Necessary Cookie should be enabled at all times so that we can save your preferences for cookie settings.

If you disable this cookie, we will not be able to save your preferences. This means that every time you visit this website you will need to enable or disable cookies again.